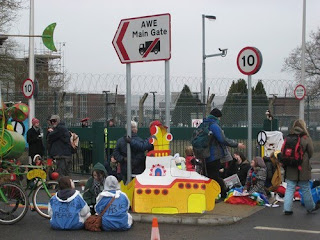 Individuals present at the blockade, which is aimed at halting construction of multi-billion pound facilities for research and development of a new generation of nuclear warheads, [2] include Nobel Peace Prize laureates Jody Williams, from Vermont, USA and Máiread Corrigan-Maguire, from Belfast, Northern Ireland (both Jody and Máiread were locked on using tubes). [3] Also present are the Catholic bishop of Brentwood, Thomas McMahon; the Anglican bishops Stephen Cottrell (Reading), Mike Hill (Bristol) and Peter Price (Bath and Wells); Jill Evans MEP, Vice President of Plaid Cymru and chair of CND Cymru (Wales); and Kate Hudson, chair of CND.

All gates have been blockaded, with a larg e number of people locked-on using tubes. In particular, several women are locked-on at the main gate exit, one of whom is in a wheel chair. Police are currently cutting people out of their lock-ons. Twenty-six arrests were reported, on suspicion of criminal trespass (at Boilerhouse Gate - Scotland - 5 people) and highway obstruction (at Home Office Gate - 6 women; Construction Gate - 13 Welsh and Belgians; plus two others. Several of the people arrested were internationals, from Spain and other countries.
Brian Larkin, a Trident Ploughshares (TP) activist who travelled from Helensburgh, Scotland, said: “This is the biggest blockade of Aldermaston in years and comes at a time when even major political parties are questioning the logic of spending up to £97 billion [4] on useless weapons. It demonstrates the depth and breadth of determined civil society opposition to Trident and its planned replacement. [5] Although the government now seems to have delayed the next phase of Trident replacement until after the general election, the ongoing construction of facilities at the AWE for the design, development and manufacture of new nuclear warheads is illegal and immoral and will only lead to further proliferation of nuclear weapons.”

Sarah Lasenby, a TP activist who travelled from Oxford, added: “The time has come for the UK to disarm its nuclear weapons. Instead of building a new generation, the government should go to the upcoming NPT Review Conference in New York and commit to negotiations for a Nuclear Weapons Convention to abolish nuclear weapons worldwide.” [8]

Each of the gates to the nuclear weapons site is themed: Scotland, Wales, England, internationals [9], cyclists and environmentalists, faith groups, women and students. Choirs, medical professionals, academics and politicians are also present.


1. The Aldermaston Big Blockade was initiated by Trident Ploughshares and supported by the Campaign for Nuclear Disarmament (CND), the Aldermaston Women’s Peace Camp(aign) (AWPC) and various other groups.

Blockades of AWE Aldermaston took place most recently in October 2008 and June 2009.
2. The Ministry of Defence’s planning application for a new enriched uranium handling and storage facility at AWE Aldermaston, Project Pegasus, was approved by West Berkshire council on Wednesday 10 February 2010, despite receiving over 1400 letters of objection. http://news.bbc.co.uk/local/berkshire/hi/people_and_places/newsid_8509000/8509099.stm
Campaigners say the new facility will be used to build a new generation of nuclear warheads, which they say breaches the UK’s legal obligations under the Nuclear Non-Proliferation Treaty [see note 7].
For information on all facilities under development or planned at the AWE, see: http://www.aldermaston.net/awe
3. Jody Williams won the Nobel Peace Prize in 1997 jointly with the campaign she worked for, the International Campaign to Ban Landmines..
http://en.wikipedia.org/wiki/Jody_Williams
Máiread Corrigan-Maguire was awarded the prize in 1976 jointly with Betty Williams for their work to end violence in Northern Ireland.
http://en.wikipedia..org/wiki/Mairead_Corrigan
4. See report from Greenpeace, In the Firing Line (September 2009): http://www.greenpeace.org.uk/media/reports/firing-line-hidden-costs-supercarrier-project-and-replacing-trident
5. In an ICM poll for the Guardian published on 13 July 2009, 54% of respondents indicated that they wanted to see Britain abandon its nuclear weapons and not replace its Trident system. http://www.guardian.co.uk/politics/2009/jul/13/icm-poll-nuclear-weapons
6. The next five-yearly Review Conference of the NPT is due to take place 3-28 May 2010 in New York. For background information on the NPT and the Review Conference, see: http://www.reachingcriticalwill.org
7. Article VI of the NPT, ratified by both the UK and the US, stipulates: “Each of the Parties to the Treaty undertakes to pursue negotiations in good faith on effective measures relating to cessation of the nuclear arms race at an early date and to nuclear disarmament, and on a treaty on general and complete disarmament under strict and effective international control.”
http://www.un.org/en/conf/npt/2005/npttreaty.html
8. For further information on the international campaign for the NPT Review Conference to commit to negotiations toward a Nuclear Weapons Convention, see: http://www.icanw.org
9. In addition to the hundreds of UK people who have participated in the blockade, there are people from Belgium, Sweden, Finland, Switzerland and Spain in attendance at Aldermaston.
(Last modified: 16 February 2010, 09:40)
Posted by nickleberry at 09:50