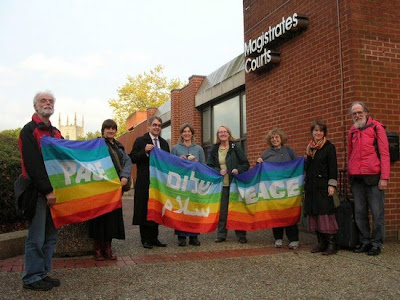 Four people who took part in the Aldermaston Big Blockade on 27 October 2008 were found not guilty on Thursday (12 November, 2009) of obstructing the highway by a District Judge at Reading Magistrates' Court, Berkshire, south-east England.

District Judge Peter Dixon Crabtree OBE ruled that the prosecution had failed to prove that the defendants were in fact on a highway or obstructing a highway. The defendants successfully argued that their blockade took place on the access road to the Tadley Gate entrance to the Atomic Weapons Establishment Aldermaston, which they claimed lies on Ministry of Defence land, and that their action to impede the development and deployment of nuclear weapons did not significantly affect traffic flow on the adjacent main road, the A340.

Royal Navy Captain Crabtree, appointed as a District Judge in 2005, did not, however, find that it had been shown that the Atomic Weapons Establishment was engaged in unlawful activity.

The successful defendants, who have each been awarded costs, are Jean Oliver from Lanarkshire in Scotland, David Polden and Emma Sangster, both from London, and Renate Zauner from Switzerland.

The trial took place on 21-22 October, 2009, but the defendants were required to return to court on Thursday to hear the judgment.

A fifth defendant, Barbara Dowling, from Glasgow, pleaded guilty on 21 October and was given an 18-month conditional discharge and ordered to pay £85 in costs.

1. Trident Ploughshares is a campaign initiated in 1998 to disarm Britain's Trident nuclear weapon system in a peaceful, nonviolent, open and accountable manner.
http://www.tridentploughshares.org


2. For further information and quotes in relation to this trial, please see the earlier press releases:
http://www.tridentploughshares.org/article1579


3. Photo (credit D. Viesnik) shows defendants with counsel and supporters outside Reading Magistrates' Court on the first day of the trial, 21 October 2009
Posted by dv at 12:31