Defendants disappointed at failure of judge to uphold international law 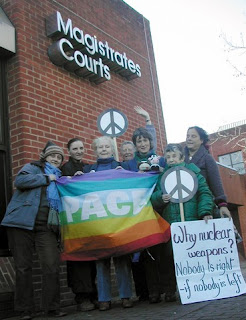 
The founder of Trident Ploughshares, Angie Zelter, from London, was one of five experienced female members of the group on trial at Reading Magistrates’ Court on Monday, 9 March 2009 for obstructing the highway during last October’s Big Blockade of the Aldermaston Atomic Weapons Establishment (AWE) in Berkshire, England.

The other defendants were Ms Zelter's daughter, Zina Zelter, from Leicester, Emma Bateman, also from Leicester, Joan Meredith, from Cheshire and Marlene Yeo, from Leicestershire. The court heard how, at around dawn on Monday 27 October 2008, the five had lay down in the A340 just north of the Tadley roundabout, “locked-on” to concrete blocks, successfully preventing workers and contractors driving into the Aldermaston base, where Britain's nuclear warheads are developed and maintained. It took the police six hours to remove and arrest the blockaders.

The women, all representing themselves, gave lengthy and impassioned evidence regarding their motivations and justifications in international and domestic law. They collectively relied on a defence of lawful authority or reasonable excuse under the Criminal Law Act 1967 Section 3, which permits the use of reasonable force in the prevention of crime; in this case war crimes, incorporated into domestic law via the International Criminal Court Act 2001.

The defendants explained how they believed that the ongoing activities at and expansion of AWE Aldermaston and nearby AWE Burghfield, together with the ongoing deployment and planned renewal of Britain’s submarine-launched Trident nuclear missile system contravened Britain’s obligations under the Nuclear Non-Proliferation Treaty and the 1996 landmark ruling of the International Court of Justice regarding the Legality of the Threat or Use of Nuclear Weapons, which could find no lawful use for these weapons of mass destruction. They also argued against the massive cost of replacing and maintaining Trident, particularly in the current economic climate.

After hearing the evidence and legal submissions from both sides, District Judge English found, "with some regret", all the defendants Guilty and fined four of the women £100 and ordered each of them to pay £100 in costs. The fifth defendant was fined £25, with no costs. All five were also ordered to pay an additional £15 victim support surcharge.

Commenting after the trial, Joan Meredith said, “I’m disappointed the courts don’t seem to be moving forward on international law; and despite the problems we’re facing with the recession, we’re still going to be burdened with billions of pounds being spent on the useless Trident missile system.”

Zina Zelter added, “As usual, this court has failed to uphold international and domestic law, which make it clear that building and deploying nuclear weapons is illegal. The job of a legal system is to uphold the law and protect the people, which is what we were trying to do by preventing the developments at Aldermaston.”

Emma Bateman added, “I hope one day we’ll find a judge with the courage to uphold the law, but I understand why they find us guilty: it is difficult to stand up to Government when it is acting illegally.”

Angie Zelter added, “The nonviolent civil resistance to prevent the building of a new nuclear weapons system at Aldermaston will continue, and one day we will succeed. I urge more local people to get involved in upholding international law.”

1. Trident Ploughshares is a campaign initiated in 1998 to disarm the UK Trident nuclear weapons system in a nonviolent, open, peaceful and fully accountable manner.

2. On 27 October 2008 , three to four hundred campaigners joined the Big Blockade at AWE Aldermaston, organised by Trident Ploughshares and supported by the Campaign for Nuclear Disarmament, Aldermaston Women’s Peace Camp(aign) and Block the Builders. Of the dozens of people who peacefully blockaded access to the base on that day, thirty-three were arrested. Other blockaders were not arrested, despite some remaining in position for up to five hours.

3. Photo may be reproduced free of charge for non-commercial use, credited to D. Viesnik. Other photos of campaigners outside court on Monday can be viewed at http://tinyurl.com/ReadingABBtrial