“Guilty of trying to provide a better future for the world”

Irene Willis appeared at West Berkshire Magistrates’ Court in Newbury on Friday 7 November 2008 to answer the charge of "wilfully obstructing a highway without lawful authority or excuse" at Atomic Weapons Establishment (AWE) Aldermaston, Berkshire, England on Monday 27 October, 2008 (during the Aldermaston Big Blockade). 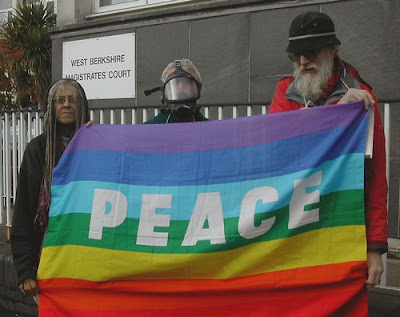 Irene (left) with supporters outside the Court building.

In response to the charge, Irene pleaded: “Guilty of trying to provide a better future for the world”

Here is a summary of Irene's statement to the Court:

“I despair of the future I am leaving for my own three children and those of the whole world. Just one Trident nuclear warhead would cause eight to ten times the devastation of the bomb dropped on Hiroshima in August 1945, six months after I was born. I’ve tried every legal method of making my views known, but to no avail. I want a world where arms, of which nuclear weapons are the worst kind, no longer exist.”

The Magistrates accepted Irene's plea and then heard an outline of the facts of the case from the Crown, which were not disputed by the defendant. Shortly before , had blocked the entrance to Tadley gate by “locking on” with a plastic tube on each arm attached to blockaders from . They lay in the road for over two hours before the police finally cut them free and arrested them. was held inside the Aldermaston base for around 6 hours before eventually being taken to police station. She was finally released at around , so spent 10 hours in police custody in total.

Irene, who was representing herself, was then allowed to make a fairly lengthy statement to the Court. The Magistrates fined her £80 plus £15 victim surcharge, with no order for costs. Knowing Irene, it is unlikely she will pay as she would see this as facilitating the illegal and immoral activities of the nuclear death factory that is Aldermaston.

I am guilty, as I said, of wanting a world where my children and indeed the children of the whole world can live safe, secure and healthy lives, free to follow their own paths in peace without the threat of violence, of which the ultimate is nuclear weapons.

I’ve tried every legal method to get my voice heard: I’ve stood in Parliamentary and local elections, sat in council meetings as the token Green, co-ordinated meetings, attended demos, leafleted the public; yet nothing ever seems to change.

We are facing a crisis such as this planet has never faced. The world is in chaos. We have the dangers of climate change; resources are running out after we have raped this Earth for so many years; and now the economy is collapsing. Our so-called leaders are blinkered; they can and will not lead us out of this mess.

Meanwhile, at Aldermaston they go on producing these weapons of unspeakable violence. I dread the day, as everything goes pear-shaped with this so-called civilisation of ours, that someone somewhere will actually use these weapons again.

Aldermaston is key to the development of the new Trident – a total waste of money as far as I’m concerned; money which could instead be used to create a new and better world instead of developing weapons of mass destruction. It has come to the point where all I can do to try and end this madness is sit my old body in front of the gates where this evil carries on and try to physically stop it.

So, yes, I plead guilty of having a dream: that of a peaceful world where there are no weapons; where people take responsibility for their actions; and where I no longer have to spend my time protesting and stand before the Court as a “criminal”.
Posted by dv at 09:57